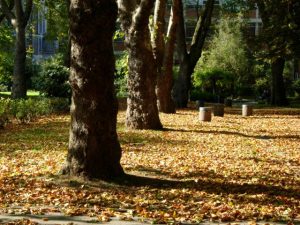 THE developers of the High Speed Two (HS2) rail link between London and the West Midlands should have to “justify the removal of every single tree” in the Euston area, the Vicar of St Pancras New Church, the Revd Anne Stevens, has said. She was speaking to members of the House of Lords’ Select Committee on Wednesday of last week, as they continued to consider petitions from people “directly and specially affected” by the proposed line.

The PCC has petitioned the committee over the expected loss of part of the ancient burial ground known as St James’s Gardens (News, 6 June). This was originally an overspill churchyard for St James’s, Piccadilly; but was bought by St Pancras Parish Church in 1887.

Ms Stevens explained that a “slice” of the gardens had already been removed by that stage to make way for railway tracks at Euston; and a further “slice” had been taken when Euston Station was expanded in the 1960s. Another slice of the gardens will be taken by the HS2 works.

“We bought it to be a public garden in an area that was already blighted by industrialisation,” she said. “They had very dense housing, very bad pollution, and all of those reasons why St James’s Gardens is a very important space still pertain today.

“So we will keep saying: ‘Is there any way that those gardens can be saved? Can HS2 somehow run on the existing footprint of the track and the station? Are there double-deck options that would avoid having to expand to the west?’ We will keep asking for all of those things, whether or not we get them.”

Ms Stevens said that she was concerned about the loss of 221 mature trees in the Euston area. “It takes 60 young trees to effectively deal with as much carbon dioxide as a mature London plane tree. . . If the plans go ahead in the way that they’ve been outlined, we believe that the only trees left, pretty much, will be the ones around our own church, right in the bottom right-hand corner.

”It’s difficult to exaggerate really what living in this area is like in terms of air quality, in terms of the relatively new age of many of the buildings, the traffic, the trains, the bleakness of quite a lot of it; and to see every place where there is a tree targeted as a compound is absolutely heartbreaking.”

The mitigation put forward by the promoters of HS2 was for Camden Council to receive funding to plant new trees and improve play areas, she said, but this could be spent anywhere in Camden, not necessarily in the area of those most affected by the works.

She also raised what the chairman of the Select Committee, Lord Walker of Gestingthorpe, described as “a very serious allegation”. Having seen draft plans for the proposed Crossrail 2 project, she was concerned that the two schemes were proposing to build compounds in different areas.

“Our fear in the community is that the number of compounds identified in all the plans has been grossly overstated — possibly, cynically — as a way of putting in compulsory-purchase orders, buying land that can then be sold at a vast profit when the project is complete to help pay for it.”

St Pancras’s also expressed its hope that it would be able to retain affected gravestones and move them elsewhere in St James’s Gardens.

“The concern is that the Archbishops’ Council, who probably didn’t have jurisdiction to agree it, agreed for them to be broken up, and we desperately don’t want them broken up,” a churchwarden, Dorothea Hackman, said. “We want to be able to look at them.”

A spokeswoman for the Archbishops’ Council said that she was unable to comment.

A committee member, Lord Brabazon of Tara, said: “Over London as a whole, and in particular the City, there’d be virtually no development at all if it hadn’t been possible to move graveyards or develop on top of them. They’ve been there for years, but when development takes place they have to go. What’s the difference between this proposal and many other sites in the City and other places?”

The committee is continuing to hear petitions. It has the power to order changes to the route and method of construction.

b) Tue 6th Sep – Camden Council 563 present their petition, Mayor GLA 805, Transport for London 750 are not expected to present theirs.